The overall objective of our RDM Wildlife Hazard Management Plan (WHMP) is to develop an integrated and adaptive program that manages risk at Redmond Municipal Airport (RDM) facilities by reducing the probability of wildlife and aircraft collisions.

Since 1989, the U.S. Department of Agriculture’s (USDA) Wildlife Services (WS) program, part of the Animal and Plant Health Inspection Service (APHIS), has partnered with the Federal Aviation Administration (FAA), Department of Defense, airports and the aviation industry to provide scientific expertise and operational assistance to reduce the safety hazards and economic impacts to aviation caused by birds, mammals, and other wildlife.

What is the WS Airport Wildlife Hazards Program?

The WS Airport Wildlife Hazards Program consists of a nationwide network of more than 400 biologists trained and certified in wildlife hazard management at airports. These professional biologists provide airport site visits and wildlife consultations, develop wildlife hazard assessments and wildlife hazard management plans, and conduct operational wildlife management programs. This work helps airport managers in maintaining a safe environment and meeting FAA regulatory requirements and DoD regulations.WS has developed and implemented internal advanced training for biologists and specialists certified for airport wildlife hazards management. In addition, the WS’ Airport Wildlife Hazards Program has managed the National Wildlife Strike Database for Civil Aviation since its inception through an agreement with the FAA. The database now contains over 210,000 strike reports from 1990-2018

How many airports receive WS assistance?

WS began concerted wildlife hazard mitigation efforts at airports in the late 1980’s. In 1990, WS biologists assisted 42 airports. By 2017, that number had grown to 890 airports and air bases, including 77% percent of the 520 airports certified (certificated) for passenger traffic in the United States.

What is a wildlife hazard assessment?

What is a wildlife hazards management plan?

Habitat Modification — Altering vegetation and water, creating fences and barriers, and other activities to make the airport unattractive to wildlife.

Active Dispersal — Scaring and hazing wildlife away from airport environments.

Trapping and Relocation — Capturing and moving animals can be used for some species when legally allowed and feasible (e.g., hawks and owls).

Lethal Removal —Lethal removal may be used in some situations for the protection of the flying public and crew. Lethal removal is permitted by the U.S. Fish and Wildlife Service and state wildlife agencies under airport depredation permits.

What is the role of WS in aviation safety research?

Understanding and integration of sensory ecology (i.e., how animals acquire, process, and respond to information in their environment), physiology and antipredator behavior to understand animal reactions to approaching vehicles

What is a Wildlife Strike?

Wildlife strikes are when birds or other animals collide with an airplane. This may occur when the airplane is taking off, landing, or while it is in the air. Wildlife strikes have increased in the past 30 years because both populations of many hazardous wildlife species and numbers of aircraft movements are increasing

Snarge is the biological remains left on a plane after a wildlife strike. If snarge is collected and sent to the Smithsonian Institute's Feather Identification Lab, feather fragments can be used to identify the species involved in some wildlife strikes. For strikes without significant feather fragment material, DNA can be extracted from the blood and tissue samples to positively identify the animal involved.

Wildlife Strike Database - Wildlife Services, through an interagency agreement with the Federal Aviation Administration, has managed the National Wildlife Strike Database (NWSD) from 1990 to the present. The NWSD contains over 210,000 records of strike reports between civil aircraft and wildlife in the USA, including about 14,400 reports in 2017. In addition, more than 4,000 strikes were reported by the U.S. Air Force in 2017. Wildlife collisions with aircraft cost U.S. civil and military aviation approximately $1 billion annually and pose a serious safety hazard

A major milestone occurred when we installed wildlife exclusion fencing around the RDM airfield perimeter. The fence has reduced the incursion of terrestrial wildlife onto the airfield to a manageable level. Avian species, however, remain a statistically higher risk for aircraft at RDM, especially during the critical phases of takeoff and landing.

Consequently, the risk evaluation process of the WHMP focuses on avian wildlife. It is recognized that the risk of a bird strike at RDM can never be completely eliminated. RDM is located in a major movement corridor for migratory and resident bird species.

The underlying premise of the WHMP is that it is possible to manage the risk to an acceptable level. The intent of the program is to provide the necessary direction to do so, in a scientifically sound manner, utilizing non-lethal means whenever possible. We are working internationally to share best-management practices that minimize harm to wildlife to support program development at other airports.

Red-tailed Hawk (Buteo jamaicensis) Common North American raptors. Because of their relative abundance, wide distribution and affinity for open areas, they are one of the raptor species most frequently encountered at airports.

Great Horned Owl (Bubo virginianus) With its long, earlike tufts, intimidating yellow-eyed stare, and deep hooting voice, the Great Horned Owl is the quintessential owl of storybooks. This powerful predator can take down birds and mammals even larger than itself, but it also dines on daintier fare such as tiny scorpions, mice, and frogs. It’s one of the most common owls in North America, equally at home in deserts, wetlands, forests, grasslands, backyards, cities, and almost any other semi-open habitat. 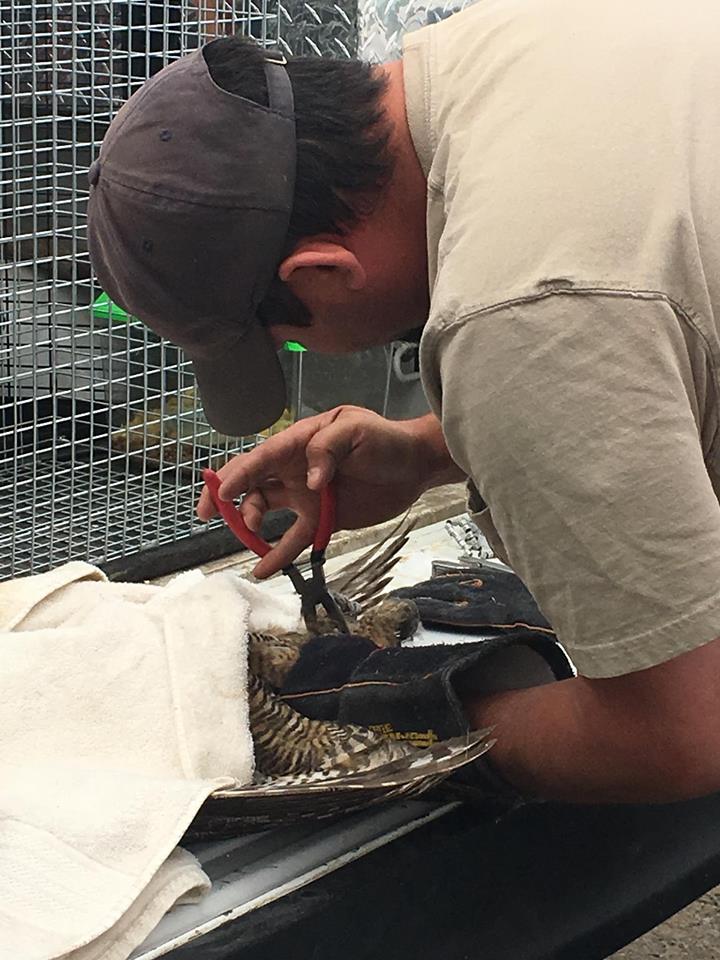 American Kestrel (Falco sparverius) North America’s littlest falcon, the American Kestrel packs a predator’s fierce intensity into its small body. It's one of the most colorful of all raptors: the male’s slate-blue head and wings contrast elegantly with his rusty-red back and tail; the female has the same warm reddish on her wings, back, and tail. Hunting for insects and other small prey in open territory, kestrels perch on wires or poles, or hover facing into the wind, flapping and adjusting their long tails to stay in place.

Osprey (Pandion haliaetus) Unique among North American raptors for its diet of live fish and ability to dive into water to catch them, Ospreys are common sights soaring over shorelines, patrolling waterways, and standing on their huge stick nests, white heads gleaming. These large, rangy hawks do well around humans and have rebounded in numbers following the ban on the pesticide DDT. Hunting Ospreys are a picture of concentration, diving with feet outstretched and yellow eyes sighting straight along their talons.